I'm a device owner Apple for years, and over time I did not have too much interaction with the US-authorized service. If it's okay to think, until the recent incident, which I'm going to tell you right away, the last time I sent a device in service, it was a iPhone 5 cu battery problems, via 2013. I sent him through the store I bought (Germanos - Telekom), and after a few days your device has been replaced with a new one.

This year we made an upgrade from iPad mini 4 la iPad Pro 11-inch 2018. The new iPad Pro was ordered from eMAG.ro, and as expected, delivery was very fast. On March 26 2019 I placed the order on eMAG, and on March 27, 2019, at noon, the courier of the door with the new iPad.
Impatient to test it, I found it pretty fast that he has one the problem with the Main Room. The one on the back. It does not capture any picture the screen remained black without the button photo capture / video or another option to work. It behaved the same after I installed another "Camera" application. At that time it was obvious to me that it had a hardware problem and I had to return it. I admit I was surprised.
I did not wait too long a few hours after I received it at home from the courier, I arrived with the new one iPad Because of the eMAG Showroom Crangasi. The boy from "Product Returns"He was as surprised as I was. He didn't expect to meet a iPad new with this problem.
From my point of view, despite the problem, it was a pleasant experience which gave me even greater confidence in eMAG services. After 10 minutes spent at eMAG Crangasi I went home with a iPad Pro new, sealed in the box.

It seems that the stars did not line up exactly when I chose to upgrade iPad. Less than two months after this incident, I found that touch screen does not work normally. She had a screen strip where she did not identify touching or took any command other than the natural one in the operation.
I tried all possible tricks to solve this problem alone, but without any results.
This time I knew that at eMAG Crangasi I can only fix something else leave the product for service. After the period in which I had the right to return, I logged into the eMAG account and requested service "pick-up & return". Specifically, it sends the courier home to pick up the defective product, then it is also returned by courier.

checking warranty certificate of the product Apple, I found that in Bucharest there were only two centers, one of which had lost its license to "authorized service Apple”Earlier this year. Yes, Noumax is no longer “authorized service Apple". Instead, I searched Google and found that Depanero obtained the license of “Authorized Service Apple" and that eMAG would work with them when there are problems with devices Apple. In addition, a blog post suggested that product owners Apple should be afraid for this, because experiences with Depanero are not the happiest. I wasn't scared at all. From my experience, I know that users leave most reviews when they are dissatisfied with their services or products. The satisfied ones quietly enjoy products or services and do not say anything on forums, blogs, etc. social networks. "Alas, I'm glad I had no problems with Orange for 3 years"You won't find much. Instead, there are enough "crap, I did not go 4G better than 5 minutes". More than that, Apple would not license a service with approach problems, as it would be at stake primarily the image and sales of the American company.

I did request for service in the eMAG platform, completing all the data correctly and describing the problem. The device left as I expected Depanero service from “Orhideea”.
Two days later I received an email from Depanero (eMAG Service) informing me that “We started the solution for your product with no. XYZ ”… and another in which I was told:“The parts required to repair your product with the XYZ identification number have been ordered. The repair will be completed as soon as the parts are available.".
The next day, I receive another email message:

Dear customer,
We inform you that the status of your product registered in Depanero service with the XYZ number was completed with the status: REPAIR.
If you have sent the product to the service using the Pickup & Return service, it will be sent by courier to the address mentioned by you.
After receiving the SMS notification, we invite you to pick up the product from the location where you handed it, if you have personally brought it. Our program is Monday to Friday between 9: 00 and 19: 00.
If the product was handed over to an eMAG showroom other than Bucharest, it could be picked up from the showroom after receiving SMS and e-mail notifications with the text "Received in the showroom".
An excellent day!
Depanero team, eMAG service partner

I knew very well that the status "FIX”Can also mean changing the product with a new one. Which is what happened. The next day I received a new one iPad Pro, perfectly functional, but this time I came in the box where I sent the defective one along with his accessories.

What worried me during the service was what was written at Depanero in receipt card. Reception product status"used, scratches on the screen, impurities from the attached pictures". No pictures attached to me. And about scratches on the screen, such a thing is excluded. I have an obsession with keeping devices in perfect condition. Always protected with premium foils and covers.
Nothing happened to the "Accessories", although in the original box were the charger and the original cable.
I went through all this when I saw at "File completion: Replaced iPad DMPYXYZ".

In conclusion, I can only say that my experience with eMAG and Depanero (Authorized Service Apple) was a very ok one. But I do not know how Depanero behaves in the case of other products, other than those Apple. It is sure that Apple they are very careful when choosing a partner. It is known that it is the most expensive American company and that they put a lot of emphasis on the image.
About two weeks after we got the device out of service, I received an email from Apple, in which I am ask me to describe my experience with the authorized service. a set of questions the Apple wants to know how satisfied I was in interacting with the partner service, Waiting time at the authorized service provider Apple, product quality iPad replaced, the general aspect of the location where the service is performed (clearly I had no way of knowing), the professionalism of the contact person, the technical training of the person who performed the service operation, the time needed to solve the problem and especially if I am willing in the future to buy other products Apple. 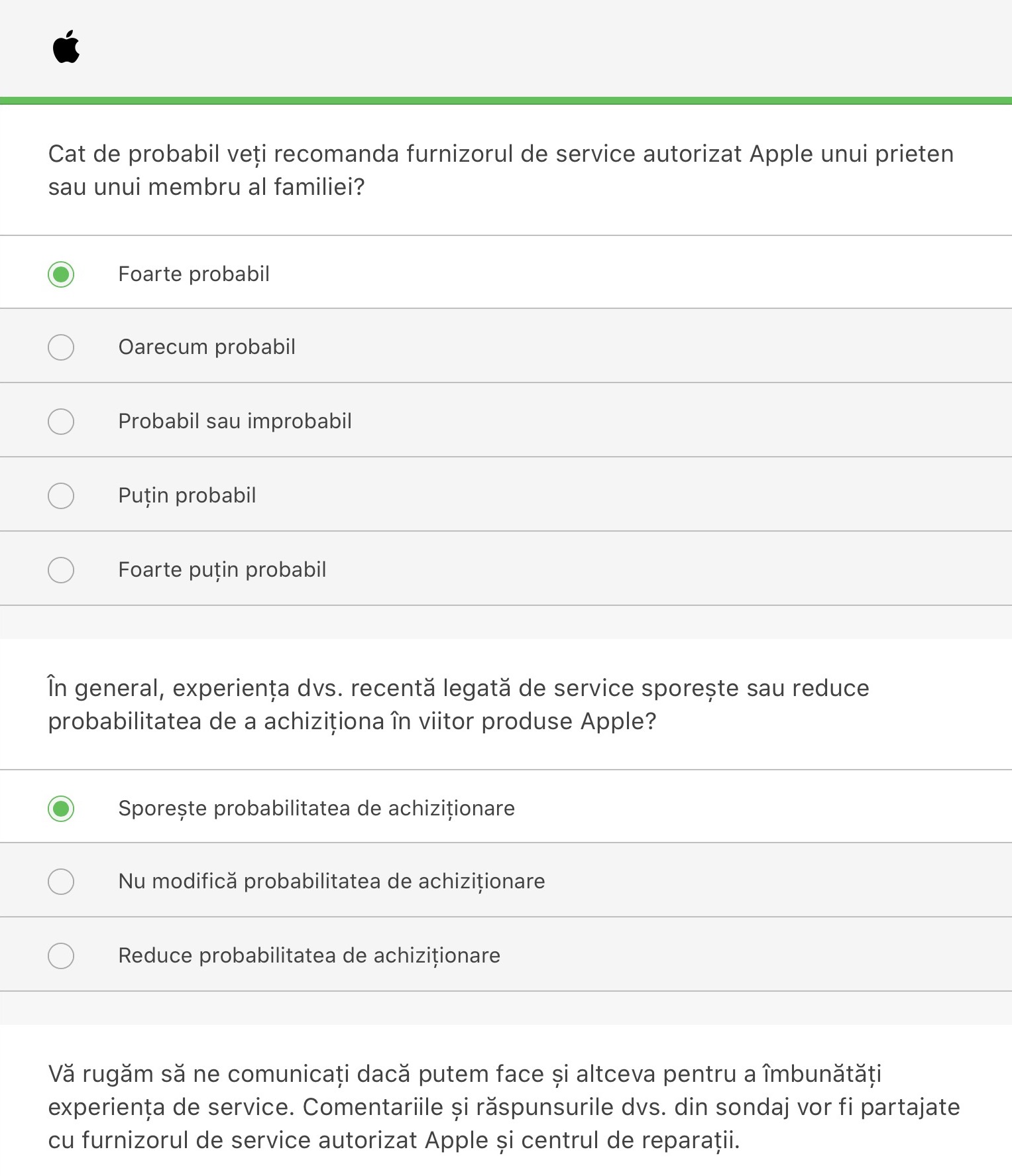 "We want to learn more about your experience with your authorized service provider Apple. "

If you interacted with Apple and / or with authorized service Apple, I am waiting for your comments.

Depanero does not send a courier to pick up the product,