Windows 10 is a completely different system than previous operating system releases Microsoft products. Although the principle and architecture have remained largely the same, Microsoft has made visible improvements and innovations on all versions of Windows 10.

Regarding the update system of Windows 10 (Windows Update), it is much altered and does not offer much the user's ability to block updates. neither would not be recommended to do so, given the current conditions in which more and more happen cyber attacks and they appear vulnerabilities (Meltdown si Spectre being fashionable during this period).

These days we have faced a somewhat strange problem related to the update Windows 10. No panel responsible for updates: Windows Update, Windows Update Settings / Options and "View Installed Update History" it did not work. It could open, though panel Windows Update remained white, showing in the top bar the pointer that would load some content.

Compared with operating systems Windows 7, Windows Vista si Windows XP, Windows 10 uses another update system. If for the aforementioned versions the updates could be downloaded from the Microsoft site and installed as a regular software, on Windows 10 these updates can only be done through "Windows Update”. As this update module of Windows 10 to be able to work, it is necessary that certain services Windows (Windows Services) to run on the operating system.

All four of these services are required to run because Windows Update to function normally.

How to check if services Windows Update runs on Windows 10

open Windows Services. Do this by pressing the keys "Win”+“RAnd type "Run" in the box "Run"services.msc"Then"EnterOr open the "Start Menu" and type "services". "Services" will appear in the results list.
In the list that opens we identify the four services mentioned above and see if they have status "Running". Otherwise we right-click on the selected service and "Home". 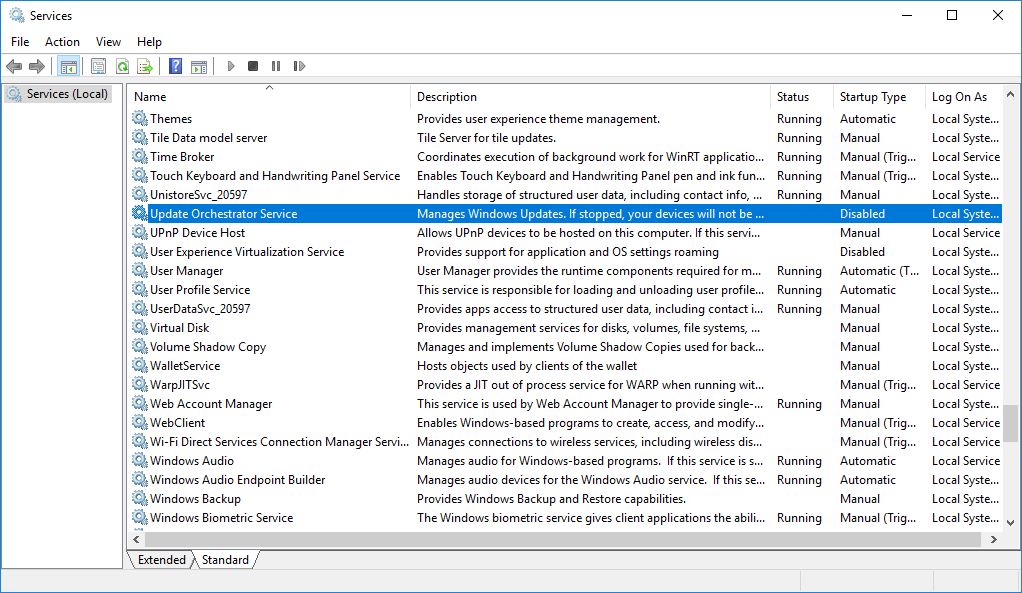 After the services are started, we go back to the panel Windows Update. Everything should work normally.

He was responsible for our problem "Update Orchestrator Service". Service to Windows 10 which is responsible for all the management of the update services. If this service is turned off, the panels "Windows Update”And“ View Installed Update History ”will display the white page and you can no longer install updates ale Windows 10. bright.

How can we fix the way update al Windows 10, in case we can no longer run updates Windows 10 or updaterefuses to install.
What are the services Windows vital for the functioning Windows Updates.

How to fix it Windows 10 Update, Update Settings and Installed Update History if it doesn't work