Among laptops and computers we can say that Apple devices are the quietest. Very few times we hear a MacBook cooling fans (fan), sign that the system is requested and has overheated. This happens most of the time when there are requests on the graphics side. Games, video editing, high resolution video rendering, 3D programs, games requiring video card and processor (CPU) or other complex photo or video editing programs.

Ever since the old one Mac OS X 10.7 Lion and to macOS Mojave (10.14 Beta) are users complaining about the excessive CPU resource usage of the "VTDecoderXPCService". In some situations VTDecoderXPCService gets to consume up to 600% CPU. This results in excessive CPU heating on the MacBook and running at high fan fan speeds. With noise. 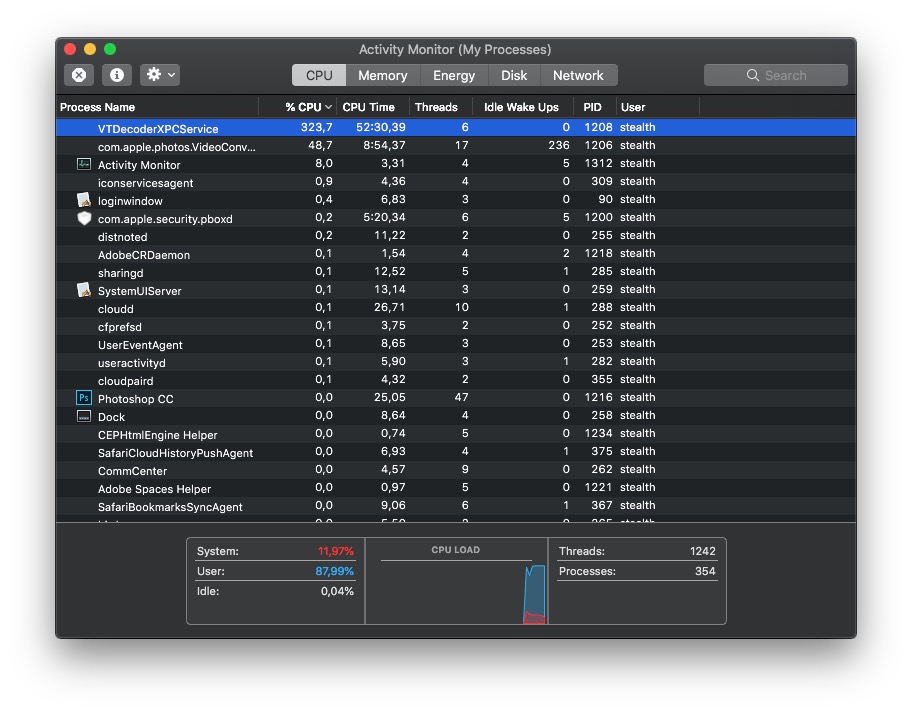 What is VTDecoderXPCService and how can it be stopped?

Fortunately, VTDecoderXPCService it's not a virus, is not a permanent process of macOS or OS X and even if it is launched it does not always have an excessive use of hardware resources. This process is only released by the system works effectively or in background cu media files. It's kind of video driver for Mac, present on both systems Dedicated video card as well as those that have only Intel HD Graphics.

During the tests I noticed that it is released when media content is opened on a web page, QuickTime Player, Final Cut Pro X, or Photos.
For example, in Photos we have recently imported video files from the iPhone or are brought from iCloud on a Mac, for a few minutes the VTDecoderXPCService's resource consumption will increase considerably. Later, it will return to a decent consumption of RAM and CPU.
Users who are disturbed by this excessive resource consumption may interrupt the running of the VTDecoderXPCService process in Activity Monitor. It's not a permanent solution and it's not just recommended if you're working on video editing, but if the process consumes excessive resources while you're working with documents or doing other activities than watching and editing media, then it's no problem.

How do I stop running the VTDecoderXPCService process?

1. We open Activity Monitor, identify the process "VTDecoderXPCService" in the process list and double-click on it.
2. In the box that opens, click on the "Quit" button at the bottom, then click "Quit" or "Force Quit" in the dialog box. 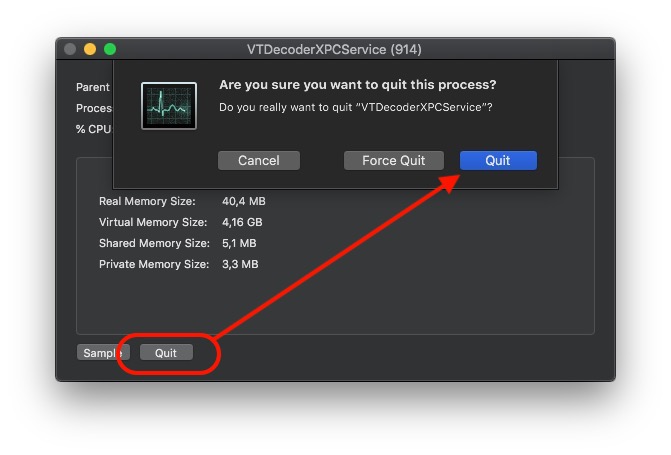 After this process, the noise produced by the fan van / fans will be reduced significantly and everything will return to normal. However, when the system asks for it, this process will automatically resume.

If you have to complete this article, do not hesitate to leave a comment.